Wrapping up the BOT, overseas guests and staff headed to Israel’s capital for the Jerusalem “Democracy in Action” Experience, which started with ethnic food tasting in the colorful Machane Yehuda market, and then on to the Israeli Knesset for a tour and academic panel, and culminating with a farewell dinner in the Judean Hills. The group raises their shot glasses at one stop in the heart of Machane Yehuda. Pictured is Dr. Merav Galili (center), Vice President for Development The group is treated to a VIP Knesset tour with BIU alumna, MK Aliza Lavie (center) Chairman of the Knesset Foreign Affairs and Defense Committee MK Avi Dichter (center), who formerly served as the Minister of Public Security, the Minister of Home Front Defense, and as Director of the Israel Security Agency (Shin Bet), shares his insights. Also pictured are MK Anat Berko (right), Chairperson of the Cyber Security Subcommittee, and moderator BIU Prof. Jonathan Rynhold of the Department of Political Studies 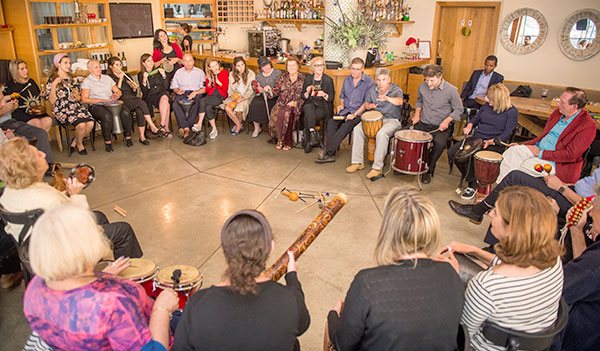 Making good vibrations, the group keeps up the beat with a variety of drums, under the “tutelage” of Dr. Avi Gilboa, Chairman of BIU’s Department of Music Dr. Avi Gilboa (left), together with Vera Muravitz, Chairman of the International Friends (right), drum up some excitement as Esther Tager (center back), wife of BFBIU Chairman Romi Tager, looks on Concluding words as the sun sets in the mountain: BIU President Prof. Arie Zaban bids farewell to overseas guests, expressing his hope to see them at next year’s BOT meetings that are scheduled for May 31 – June 5, 2019